What It’s Like to Drive Ford’s New Mustang Bullitt 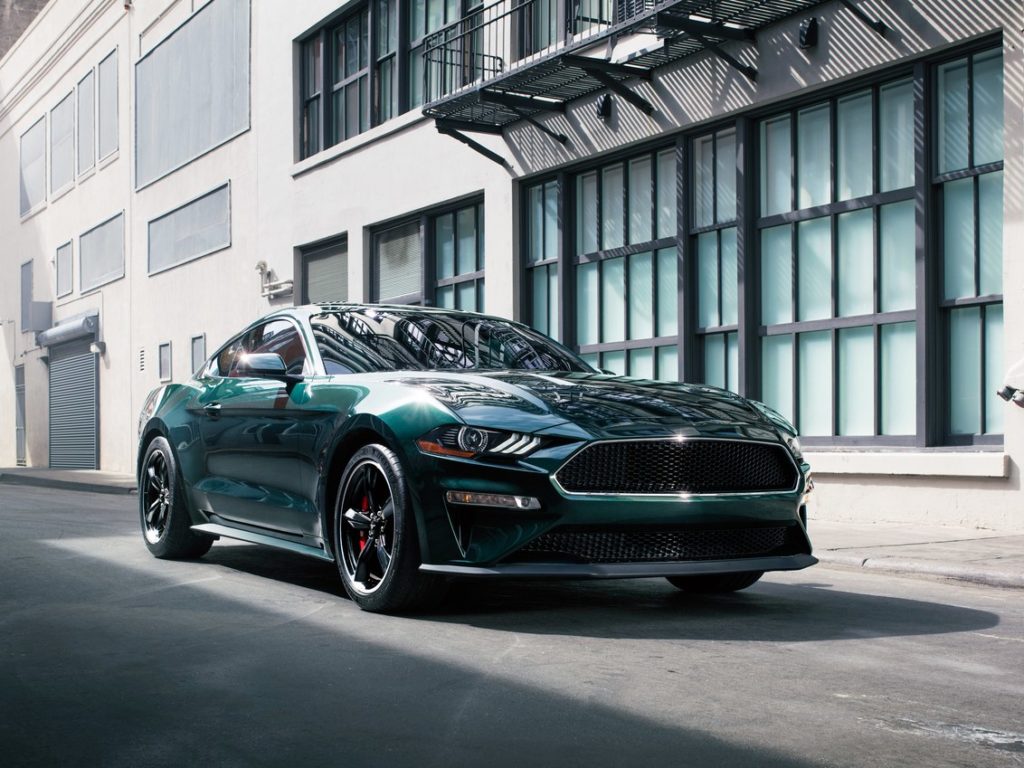 The lane of oncoming traffic ahead of me is clear, so I use one hand to spin the wheel to the left and point the hood of the car up Pescadero Creek road. My other hand is cradling the white cue ball that tops the stick shift, and as I tighten my grip, I push the stick forward and away to put the car into third gear.

I back out the clutch and press the accelerator—really, just giving it a little nudge—and my passenger and I go leapfrogging straight up the hill, the exhaust popping and burping behind us. The mighty Brraapp comes rippling up through the back of the car and swats our ears in the same way a wet, low B-flat from the sousaphone in a New Orleans brass band rattles you when you’re standing a little too close but you don’t care because you’re so lost in the heat and the booze and the rhythm. I push down harder toward the floor and suddenly we’re doing 54 mph straight up the hill. It’s exhilarating.

I shift again, to fourth gear. With each new slot, the pitch of the exhaust goes up and down as the engine speed automatically adjusts to match the new choice of gearing. With the release of the clutch comes another explosion of decibels. Braaaaaah. Suddenly we’re pushing 70. I giggle and say it again, the word I’ve been muttering like a mantra ever since I took the wheel 20 minutes ago, the word that defines this vehicle, the word that should be stamped onto the vanity plate at the factory: Silly.

The beast I’m driving is the 2019 Ford Mustang Bullitt. It’s a special version of the Mustang that Ford developed and brought to market to commemorate the 50th anniversary of the film Bullit. In that movie—if you remember, and I know you do—there’s a famous car chase scene where the good guy (Steve McQueen) drives a green 1968 Mustang fastback as he chases the bad guys’ black Dodge Charger up and down the hills of San Francisco. It’s easily the most beloved car chase in Hollywood history. When audiences saw it in the fall of 1968, it made the young Mustang—then just four years old but already a hit—even more desirable, masculine, and sexy. Never mind Steve McQueen. 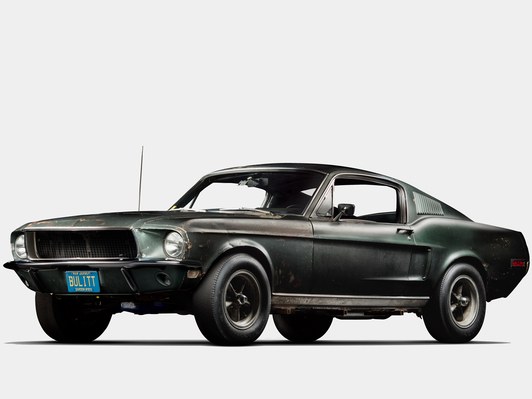 This car, the 2019 Bullitt edition, takes all the greasy DNA of the fetishized original and folds it into a modern Detroit chassis. On paper, the $46,595 Bullitt Mustang is not far removed from Ford’s recent Premium GT model Mustang. It’s got a 5-liter V8 with 480 horsepower and 420 pound-feet of torque. Top speed is a silly 163 mph. The rev-matching manual transmission has six speeds, and shifting between them is as easy as reciting the alphabet. The performance-tuned suspension is borrowed from the Mustang GT, and the Brembo brakes are painted red so you can see them poking out from behind the front rims. In the dash is a B&O sound system and the Mustang’s brand new all-digital instrument cluster. The car is shaped, of course, like a fastback. Silllly.

Just like the ‘68 McQueenmobile, this Mustang comes in “dark highland green” (or straight black, but why would you ever choose that?) and is adorned with choice bits of Bullitt bunting. The film’s logotype-in-crosshairs logo sits at the center of the steering wheel, on the passenger-side dash, and on the dummy “gascap” on the rear where the Mustang badge would normally go. Then of course there’s that white cueball stickshift knob, just like the one in the vehicle that was driven in the movie. When I first walked around the car, I thought all the Bullitt badging felt a bit thirsty, but if you’re buying a Mustang, you really do need to advertise that your Mustang is more rare, more beastly, more obnoxious, and more silly than the all other Mustangs. So be it. 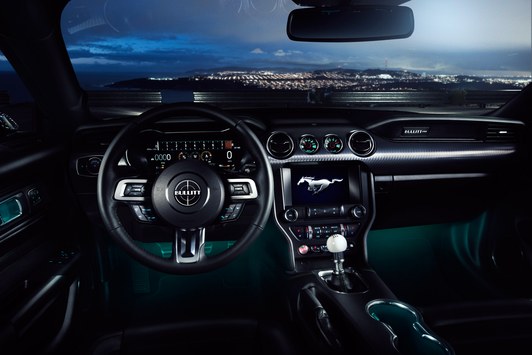 I take the Bullitt over the ridge and down to the ocean, where we’ll turn north and run up Pacific Coast Highway. I find some stretches of road where I can just cruise, and I lift my hand off the cue ball to test some of the settings. The only one I’m really interested in fiddling with is the exhaust mode selector. The nasty trumpeting I’ve been spraying all over the northern California hills for the last hour is the result of “Normal” mode. I switch it to “Quiet.” It really is quiet. The car’s bite on the road isn’t lessened one bit, but the air feels suddenly neutered, as if one of the world’s great orators has ceded the podium to a prim accountant who begins reciting quarterly earnings statements. I flip the selector up two notches to “Sport” mode. The foul bark comes back, deeper and stronger. Dare I try “Track” mode? I dare. What a woof! I could be considerate of the kind folks enjoying their lunchtime buffets in their cozy homes tucked among the vineyards as we go wheeling past. But no. This is Bullitt. This is American might. Listen to my engine! I purposefully let each gear rev higher than I should before up-shifting just to get the eardrums buzzing. I implore my passenger to say it with me: Silly, silly, silly.

Soon, we are surrounded by minivans and Priuses as we ride tight, afternoon traffic all the way up through Half Moon Bay and into San Francisco. Sadly, this will be the Bullitt experience for most buyers—a modest 42 mph with plenty of red lights. But even when it’s stuck the pen, the Mustang can smell the open prairies. I can steal three lengths from just about anyone off the line at a green light, and I make a game of it, doing it again and again. Because that’s what bucketloads of horsepower and torque are for. It’s addictive. Even in traffic, I can’t stop giggling. 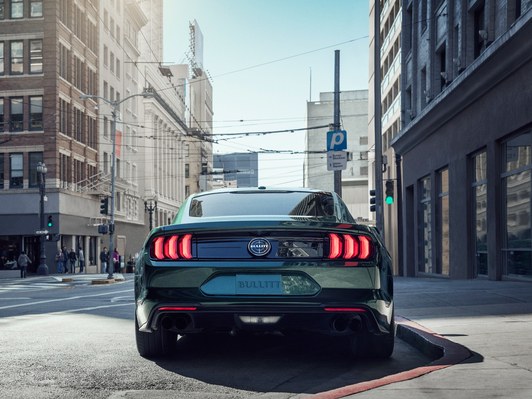 At dusk, Ford corrals the assembled journalists into a cocktail reception at a resort north of San Francisco. Naturally, the bourbon at the open bar is Bulleit. I spend some time chatting with the Ford company reps, all of whom are thrilled to be here, driving this car on the very streets that made it famous. We watch scenes from the 1968 film, we play Bullitt trivia games, we race Bullitt slot cars, and we shoot pool using a custom cue ball with the six-speed transmission mapped on it. We talk about the Mustangs of our youth. I tell them how I learned to drive behind the wheel of my parents’ 1988 Mustang GT convertible, which makes us all smile.

When I ask the Ford guys about the differences between this Bullitt Mustang and the other current Mustangs, they rattle off a few stats but ultimately settle on one point: The key thing this car offers is a visceral experience different from what you get in other Mustangs. When you roll down the window and hear the engine kicking, when you feel the exhaust note curl up the small of your back, when you look down and see that cue ball, you’re getting something wholly unique. It’s fresh and rare and you can’t replicate it in any other car. The original ‘68 fastback, which has its own vibe, doesn’t come close. The souped-up Mustang GT doesn’t take you there either. The Bullitt is its own singular and delicious brand of silly.